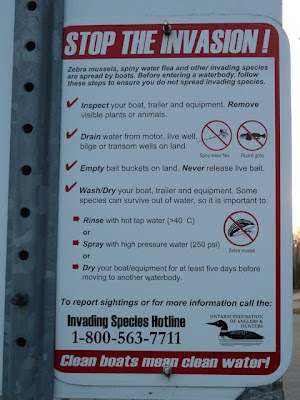 Sadly, I think it's too late to stop the zebra mussel invasion. I have photos that show they are alive and well throughout the Trent-Severn Waterway. :(

I see that sign at boat landings both here in Florida and in Oregon -- those zebras sadly must get around!

Last year I was at my nephew's cottage near Havelock Ontario. The river bed is lined with zebra mussels. The Ministry Of Natural Resources would like you kill any gobies that you catch.

Yes, I think the mussels travel around, they are a real pest.

I have problems linking up, tried it three times.

Carola - I have link you

It's good to have a detailed warning like this as to why boats need cleaning. Then people may feel a reason to be careful!

It's good to educate the public and hopefully see some limitation of these invasive species spreading further. We have similar problems here in Australia with several introduced species fo both flora and fauna.

PS: Thanks for hosting, Lesley!

I saw a documentary about the Asian carp that are heading towards the Great Lakes through a canal in Illinois and it was really scary!

I photographed a sign with this same message just a few weeks ago.

As they say, "Great Minds."

It grabs your attention.

Chrissy from Manchester: a photo a day at Mancunian Wave